BOULDER, Colorado. (March 2-5, 2017) — The city of Boulder buzzed with film enthusiasts and filmmakers from March 2-5 during the 13th Annual Boulder International Film Festival (BIFF), with attendance again numbering over 20,000 attendees.

The four-day festival featured 51 films and a variety of unique events including a CineCHEF food event, a Virtual Reality Pavilion, 8 films directly from Sundance Film Festival and 4 films nominated for an Academy Award.

“We had such a great weekend celebrating our second decade of film in Boulder,” said Robin Beeck, BIFF’s executive director. “A fabulous group of filmmakers, film lovers, sponsors and volunteers – they all make the festival possible.”

 Virtual Reality Pavilion— As technology evolves, so too does the way we tell our stories. BIFF 2017 brought technology and the art of filmmaking together—giving people the opportunity to experience the future of storytelling firsthand. Our carefully-curated VR content included the world premiere of ‘My Beautiful Home,’ the Colorado premiere of

‘Chasing Coral: The VR Experience’, and the first-ever VR film to be nominated for an Academy Award, ‘Pearl.’ Over 1,000 people were able to view these amazing films throughout BIFF weekend.

 Closing Night— BIFF celebrated the best of the fest by awarding our winners their Vielehr sculptures. Then, straight from its Audience Award-winning premiere at Sundance 2017, BIFF’s Closing Night featured the stunning new documentary ‘Chasing Coral,’ from Boulder-based director Jeff Orlowski. Orlowski, producer Larissa Rhodes, and a distinguished group of scientists and environmentalists featured in the film were on hand for a fascinating post-film discussion—a great ending to another great BIFF! 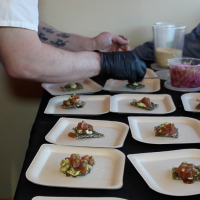