An inspiring young athlete dies at an early age from debilitating cancer. Those who knew him were determined to share his story.  Born to Lead isn’t just another sports film, but bears witness to a sports legend’s courage and grace. It is the story of Sal Aunese.

Sal Aunese made sports history in his own right. That was before he passed away from terminal cancer at 21 years of age. Aunese was the star quarterback for the University of Colorado from 1986-1988. His record holds 92 passes without an interception, and he was the driving force for the Buff’s National Championship in 1990.  “I knew that I’d do the story January 1, 1991,” says George Antonopoulos producer of the film, “the goal was to honor Sal and his spirit and to show people we got something great.” Antonopoulos, who attended the University of Colorado the same time as Sal Aunese, says that he watched the story unfold during his time there. It took many years to accomplish his dream of making this film, but Aunese’s story had to be told.

For those of us who still haven’t seen the movie or even heard of Aunese’s story, the film carries some valuable life lessons. Lara Slife, the director of the film, was only just learning about Aunese when she began filming, ” Everything was just so meant to be with this film. The journey was amazing.” When asked what she had learned about Aunese in the process of making this film she replied,”I learned that he was a person that was never selfish. He was always giving to others. There was something about him that brought people together, and I think we all can learn from that especially in the times we live in.”

There is talk of a feature film in the works. Those who worked on the film hope the story can reach a wider audience. Here at BIFF, we hope everyone gets a chance to see and be inspired by Born to Lead. 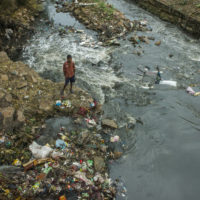 The Virtual Reality Experience at BIFF, From Galvanize