“Somebody said why don’t we invite a bunch of famous characters to show off and make it a party and then they could be more of a decorative element in the party,” says David Ortolano, producer of the character production. The characters are produced each year by Ortolano and assistant producer Shari Soroka. Ortoloano and Soroka both believe that the characters are a fun way to draw attention to the film festival.

Aside from the entertaining aspect, the characters are useful devices when it comes to crowd control. Each year the characters act as chaperones for two of BIFF’s opening night parties in that they wrangle the crowds of partygoers to their final destination, the Boulder Theater.

“A lot of it is intended for crowd control. How do you direct people to a totally different building and then get them focused and settled and suited to watch a movie,” Soroka says.

However, during these parties, the characters remain in the crowd – entertaining and taking pictures with people, and all the while never breaking character.

This year festival attendees witnessed a lot of tennis garb from the characters as the opening film for BIFF was Borg vs. McEnroe, a film about the epic tennis rivalry in 1980 between Bjorn Borg and John McEnroe. Many of these tennis characters dramatized a tennis match as the parties were taking place.

“It’s a brilliant stage to display these kinda skills and its fun,” says Ashe Helling, one of the characters at BIFF this year.

“BIFF is like an amalgam of makers almost everyone there is on a volunteer basis and so the people that are there want to be there,” Helling says.

Helling has been a character at BIFF for a few years now. She played Furiosa from Mad Max a couple years ago and Jaylah from Star Trek Beyond last year. For Jaylah’s character, Helling actually got to play around with her passion, prosthetics.

Helling is a prosthetic artist and enjoys storytelling through this medium. This year though she kept it simple by recreating Major Kusanagi from Ghost in the Shell.

For Helling, the characters allow her to tell a story through her performance and also allow her to network with artists alike.
“The film festival itself brings together a bigger scale of makers. You can just stop someone on the street in Boulder and say hey you worked on this project we should network. For me it’s just a fun outlet for fabrication and acting work.”

The characters interface entertainment and art for festival attendees. We look forward to seeing them at BIFF each year. 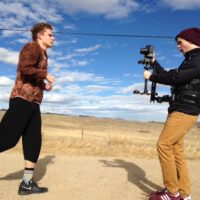